A Word About Civic Engagement

Asian Americans is the fastest-growing racial group in the U.S.  One in five residents in Orange County, CA (where we're headquartered) is Asian American.  However, Asian Americans don’t vote, at least not on par with the general population.  Despite increasing our turnout in 2018 by 50%, we still have the lowest voter participation of any demographic group.  Who’s going to pay attention to our community if we don’t vote?  No one.  We need to change that.

​Civic Engagement is a technical term for getting the public to engage in civic affairs, ie: voting and organizing.  We have to reinforce the notion that civic engagement is critical to our current and future success as a community.  This starts with education and curating events that will meaningfully engage our community.  As such, civic engagement will be automatically embedded in everything we do. 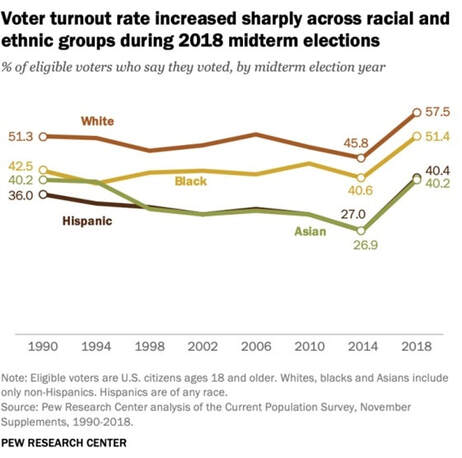 WHAT WE CARE ABOUT:

​Closing the Disparities in Health Outcomes
Unequal access to affordable, quality healthcare has a disparate impact on poor and minority communities where public health services are a significant source of health care.

​Asian Americans have a 3x greater risk of heart disease, comprise a growing percentage of youth suicides and is the only ethnic group to see an INCREASE in breast cancer rates in the last 10 years.  Yet there are limited resources dedicated to the AAPI community.  Some of our communities live in healthcare deserts, without language assistance and cultural competency.

​Fighting For Representation
Asian Americans are most likely to say that their answers to the Census “will be used against them.” An astonishing 41% of Asian Americans expressed this concern versus just 16% of Whites.

​Without an accurate count, Asian Americans will receive less funding for our schools and neighborhoods.  And more damaging, we may lose representation in Congress, which would set us back 10 years and have an immensely negative impact on our children.

​Protecting Immigrant Rights
Since 2010, there have been more immigrants from Asia than any other group, primarily through stipulations in immigration law that favor reuniting family members. The Trump Administration wants to do away with that.  This policy pivot will affect Asian Americans disproportionately and magnify the trauma of family separation within our refugee communities.

In addition, the Trump Administration instituted a new policy that would make green card holders eligible for deportation if they use public benefits like prescription subsidies, Section 8 housing or eating free school lunches, even though permanent residents/ green card holders pay for those benefits as tax-payers.  This "public charge" rule is unjust and immoral.

​Advancing the American Dream
Despite the “model minority” myth, Southeast Asian Americans have the lowest high school graduation and bachelor degree rates among all ethnic groups, including Latinos and African Americans.

​This is a pattern not exclusive to Southeast Asians but to all Asians who immigrated to the US in recent years.   In addition to Southeast Asians from Vietnam, Cambodia, and Laos, this group includes Indians, Koreans, Chinese and people from other Asian countries.  It is incumbent upon us to help promote policies to help make college accessible for low income communities of color and invest in equity, diversity and inclusion programs to democratize opportunity  across all sectors.

​Protecting Our Children
Beginning with Columbine in 1999, more than 187,000 students attending at least 193 primary or secondary schools have experienced a shooting on campus during school hours.

​Every day, threats send classrooms into lockdowns, causing a significant amount of trauma. Active-shooter drills at school have kids as young as 4 hide in darkened closets and bathrooms from imaginary murderers.  We must work to stop gun violence.

​Building A Better World
In the mid- to late-19th century, Asians were thought of as “brown hordes” or as the “yellow peril.”  By the middle of the 1960s, political leaders started to suddenly praise Asian Americans as so-called model minorities to combat pressures from the Civil Rights movement.

Today, hate crimes against Asian Americans have surged.  In a recent poll, 61% of Asian Americans believe discrimination exists, with a third reported having experienced racism.  Join us in our efforts to ameliorate race relations in America and fight for equal rights.

Declaring a Global Emergency
Approximately 400,000 people are killed annually from the impact of climate change and millions are displaced. Global warming will be felt most bluntly by communities of color and impoverished neighborhoods, including areas where ethnic enclaves are traditionally located.

It is critical that we advocate for solutions and promote ways to address the environmental injustice born by our most vulnerable communities.